Cubicolor is the band name of former Duologue frontman  Tim Digby-Bell and Amsterdam-based producers Ariaan Olieroock and Peter Kriek, and electronic music is what they make. Damn good music is what they make, using both synths and music concrete they are adept at blending it together in a nice album called Hardly A Day, Hardly A Night. 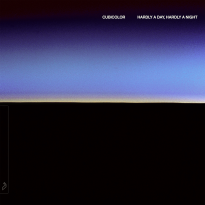 It has been a long wait since their debut album, Brainsugar, was released in 2016, also on the electronica label Anjunadeep. The wait, however, has been worth it.

After shelving a complete album that would have been released in 2018 they replaced that albums 12 tracks with 12 tracks on their new album Hardly A Day, Hardly A Night, 12 luscious tracks that weave together the cycles of time and the planets along with feelings of loss, hope, and acceptance.

Blending the signature vocals of British singer-songwriter and former Duologue frontman Tim Digby-Bell with Amsterdam-based producers Ariaan Olieroock and Peter Kriek, Cubicolor is a band to watch for as they bring their one of a kind production and instrumentation to shows around the world in 2020. Cubicolor will kick start it with an album release event in London in February 2020, before taking their live show on the road in the summer.

‘Hardly A Day, Hardly A Night’ is available to pre-order now, digitally, on CD and on limited edition 2×12” gatefold vinyl, due for release 21 February 2020. I can see this album becoming a listen that I can’t go hardly a day or hardly a night without listening to. Check it out: https://music.anjunabeats.com/