Saturday, July 8th was a day well spent. We arrived at the drop-off point in St. Albert an hour before the gates were scheduled to open and I was mildly surprised to find very little congestion, in fact, there was none. Walking the short distance to the festival site we encountered almost no other concert goers and upon arrival at the gate, we were only about a dozen back from the front of the line. I had been expecting a longer line considering the depth of talent scheduled for the event, I will tick them off one by one as this blog moves along, but there were only a few diehard queuers ahead of us.

Promptly at the hour, the gate opened the security was immediately overwhelmed because the first few people in the queue had packed for a camping experience as well as a music festival. They had wagons filled with coolers, umbrella’s, chairs and enough food to feed a small refugee camp for a day. It turned out to be largely a non-event as security was rather quick and within a few moments, we were heading for the grass in front of the stage where we quickly set up our brand new festival friendly lawn chairs about 10 meters back of the stage, dead center. The rush for real estate also proved itself to be a non-event since there was only a modest line behind us and many of them chose spots further from the stage where they set up camp for the day. Some even went so far as to bring cabanas, which was probably a good idea if you didn’t mind sitting further back because the sun was blistering hot all day.

With an hour to spare before the first set began we settled in, surveyed the land for amenities such as portaloo’s and food trucks and got as comfortable as is possible in festival chairs in 30-degree direct sunshine.

Up first was the M.C. to introduce the mayor of St. Albert, a few other dignitaries as well as the people responsible for organizing and developing the festival, well-done everyone and thank you for doing what you did to make it happen.

First up for entertainment was Hailey Benedict who gained instant star status when Keith Urban invited her to join him on stage at his Rogers Place concert in September of 2016. She then performed a song that she had written herself and not only wowed Keith Urban and his fans but went viral on YouTube as well. Hailey’s song, My Sweet Alberta Home, was a finalist in the 2013 All-Alberta Song Contest so she came on stage with an already impressive resume despite her young age, and she did not disappoint at Seven Music Fest either. She only did a few songs but I heard a great voice and very nice guitar playing that bode well for her to have a great future in music if she continues to pursue it. I was also impressed with her stage presence.

And then came Paul Woida who calls himself a “one-man band” who replicates the full sound of an entire band all by himself by using loops played and recorded live on the spot. OK, enough about Paul, I am not a big fan of his process. He is good at what he does but it’s not my thing.

Next up was an artist who impressed me when I reviewed her material in prep for the festival, and Sykamore did not disappoint me. Her playing, on what appeared to be a parlor guitar, was quite good and she has a pleasant voice that complimented her lyrics.  What did disappoint me was her accompanist, who attempted to play electric guitar and lap steel as well as singing backing vocals, all of which was a dismal failure. Sykamore solo would have been a treat. Sykamore with this person was a disappointment. Sycamore has a penchant for wearing plaid shirts in place of a skirt, but this isn’t a fashion column so we will move right along.

The Provincial Archives were next to grace the stage and they knocked my socks off, which is a huge compliment because I wear cowboy boots and it ain’t easy to knock my socks off. The Provincial Archives rocked it old school punk and grunge and I don’t know what else, they just plain belted it out and left nothing in the tank. They are advertised as an indie pop trio but I think that does them a disservice, they are so much more than just another indie pop band. They are a trio and they work well together, the drumming was tight and not excessive, the bass backed everything up and still managed to keep it all chugging along and the lead guitar blazed, jumped and boogied. Do you think I liked them? Well, I did. I will be hitting up the local record store for some of their vinyl for sure.

The Royal Foundry, yes we do have a theme going here with names that start with “The” as well as being a bit geographic in nature. I will destroy this concept later. I totally enjoyed The Royal Foundry, that’s what my notes from the show say. And I did, I totally enjoyed their natural stage presence and how they engaged the audience and developed an instant rapport. The music was good as well, they are electric-alt-pop-art- rock or something similar. Whatever the music is called, I call it good. Another want list item for the vinyl vault.

The Royal Foundry won points with me for their rad instruments: a St. Vincent guitar and a glossy black mobile cello:

The Elwins were up next and after the Royal Foundry had pumped me up it was difficult for the Elwins to sustain my adrenalin. They were good, they had energy, they put out a good sound, but they didn’t make my day. Maybe they changed instruments one too many times and lost me in the shuffle, or maybe it was too high of expectations for me. Whatever it was it didn’t happen with the Elwins or with Frazey Ford.

Frazey Ford, not just another name to make auto correct go crazy. I really wanted to sit back and relish the sound of Frazey Ford and her band. I have been listening to her sing since I discovered The Be Good Tanya’s song Rudy on a Christmas album called A Winter’s Night: The Best of Nettwerk Christmas Album., and I really liked what I heard so I bought The Be Good Tanya’s albums, and I still liked what I heard. So I sat in the sun at Seven Music Fest and really tried to like Frazey Ford and her band, but it didn’t happen. I don’t know why it just didn’t happen. Maybe it was too much sun, I don’t know why but I do know that we didn’t connect. It wasn’t bad. It just didn’t connect with me on that sunny Saturday afternoon in St. Albert and it’s a shame because I know that she has the talent and the band was good with their soulful horn driven sound, but it just didn’t connect.

And then came the Rural Alberta Advantage. Remember a ways back in the blog when I said that I would destroy the whole band name thing? Well, here it is, the Dad joke of the blog: If we put The Royal Foundry in The Provincial Archive would it be an Advantage to Rural Alberta? OK, let out a collective groan and we will move on.

This is Joel, the 4th member of Rural Alberta Advantage.

Rural Alberta Advantage easily could have been the show closer, but Seven Music Fest saved The Strumbellas for last, desert if you will. I saw the Strumbellas at the Winspear back on October 20th of 2016 with another favorite band of mine: The Zolas and the Strumbellas had the audience in the palm of their hands. They whooped and hollered and rocked and rolled and brought the house down, down to the front of the stage, which in the austere setting of the Winspear is something of a no-no. But they did, and they did it again at Seven Music Fest. The crowd gathered at the foot of the stage and were engaged with and enthralled by The Strumbellas. It was an interesting contrast from the Winspear stage to Seven Music Fest. A different crowd, a different vibe, and a different set. Oh sure, they did most of the same songs but they were different. For one thing, Jon Hembry, the lead guitarist, was playing a Gibson that looked like an ES335 when they played the Winspear and at Seven Music Fest he as playing a Fender Telecaster. Different guitars and a different sound. It was a bit grittier, a bit more driven, a little dirtier sound which was appropriate for an outdoor festival and it fit the mood of the night. And it was a beautiful night, the skies turned a brilliant shade of pink and competed with the stage lights for attention. The stage won because The Strumbellas were playing and it’s hard to not pay attention to them, they are that good. 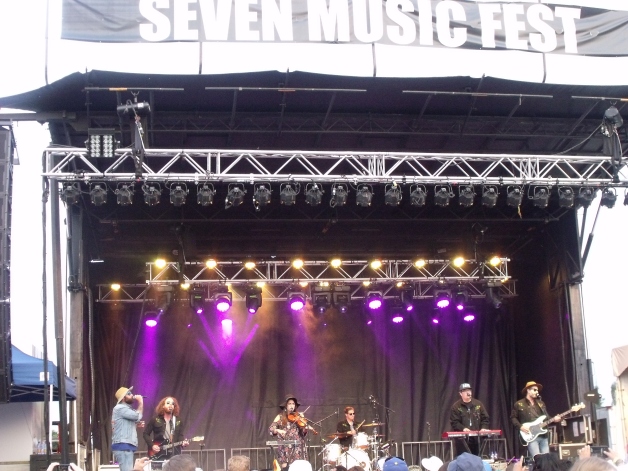 It was a good day all in all. I heard some new music and reheard some old music in a different light. I burned my nose and I think I tried to burn my candle at both ends because I am in pain today but it was all worth it because the musicians we that good. Thank you to St. Albert and the festival organizers, I can’t wait to see what next year brings for musical treats.